According to experts, it is supposed that the unique rocky landscapes of Iwayaji were formed by the whole area’s upheaval and erosion following sedimentation of the river-carried sand gravel on the acutely uneven bedrock of crystalline schist at an inlet in the Eocene epoch of the Paleogene period (approximately 50 million years ago).
Most of the temple buildings (including furnishings and various historical materials) were destroyed by fire in 1898, leaving only the Deva Gate and the Shrine for Kokuzo Bosatsu (Akasagarbha Bodhisattva) intact. Accordingly, many of the present temple buildings have been built since then. 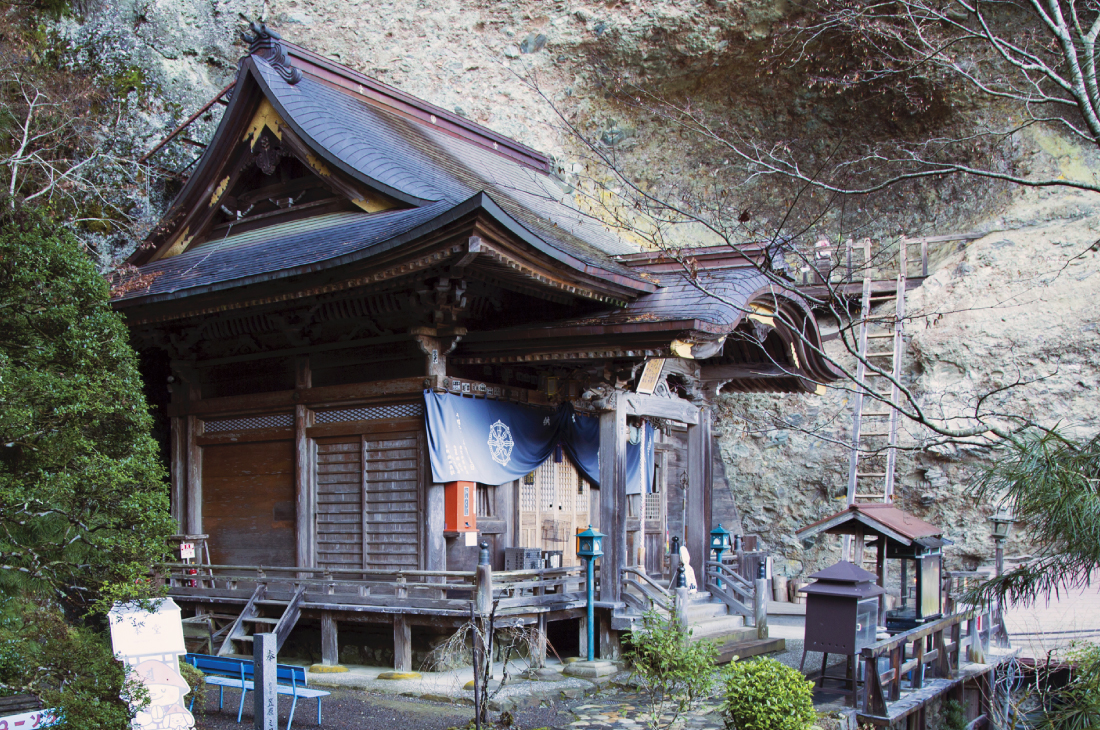 The Main Temple Hall was completed in 1927. At first sight, it appears rather peculiar among the temples on the Shikoku Pilgrimage Route that the main temple hall is smaller than the temple hall for Kobo Daishi; however, as legend has it that the entire mountain was deified, the Main Temple Hall is built as if to be integrated with the huge rock cliff (the Crown of the Diamond Realm) soaring behind. It is dedicated to Fudo Myo-o (Acala Vidyaraja), which is said to have been carved by Kobo Daishi himself and hidden from the public. On the 28th day of every month (the festival day of Fudo Myo-o), the rite of burning wooden sticks (goma) is performed. 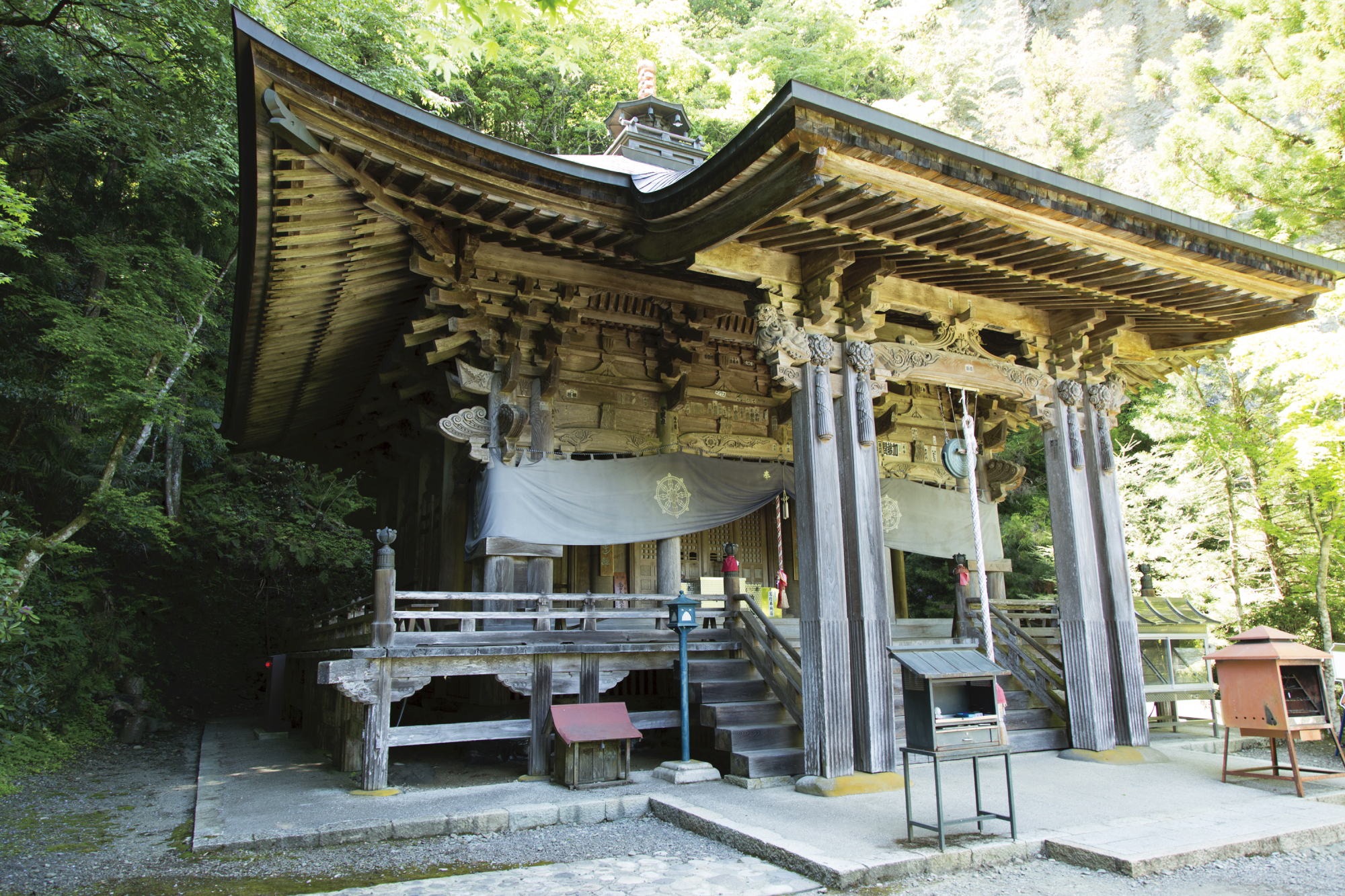 The Temple Hall for Kobo Daishi was designed by Shoichi Kawaguchi of Matsuyama-shi and completed in 1920. While the underlying tone of construction is based on the conventional temple building techniques, as one of the masterpieces of the modern temple building that incorporates a number of Western architectural designs, it was designated as National Important Cultural Property in 2007. On March 21 (lunar calendar) every year, a memorial service on the anniversary of Kobo Daishi’s death is held here. 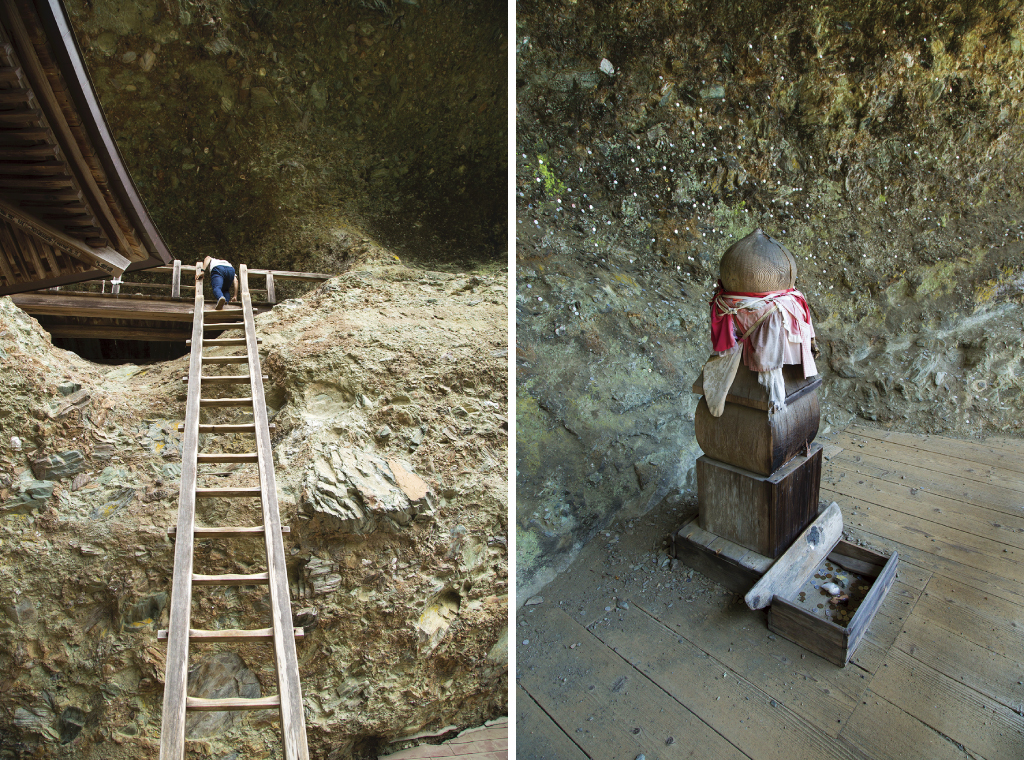 The towering rock cliffs are dotted with small caves (Iwaya) in which many monks are said to have confined themselves for ascetic practices in ancient times. The cave near the Main Temple Hall (the site of the shrine for Hokke) can be accessed by a ladder, commanding a sweeping view of the entire temple precinct surrounded by huge rock cliffs and giant trees.
A statue of Amida Nyorai (Amitabha Tathagata) is enshrined in a cave above the site of the Hokke shrine, whose provenance is now completely forgotten. A pilgrimage drawing from the early Edo period depicts it as “Cave Amida,” which can be looked at from the area near the Deva gate at the back of the Temple Hall for Kobo Daishi. 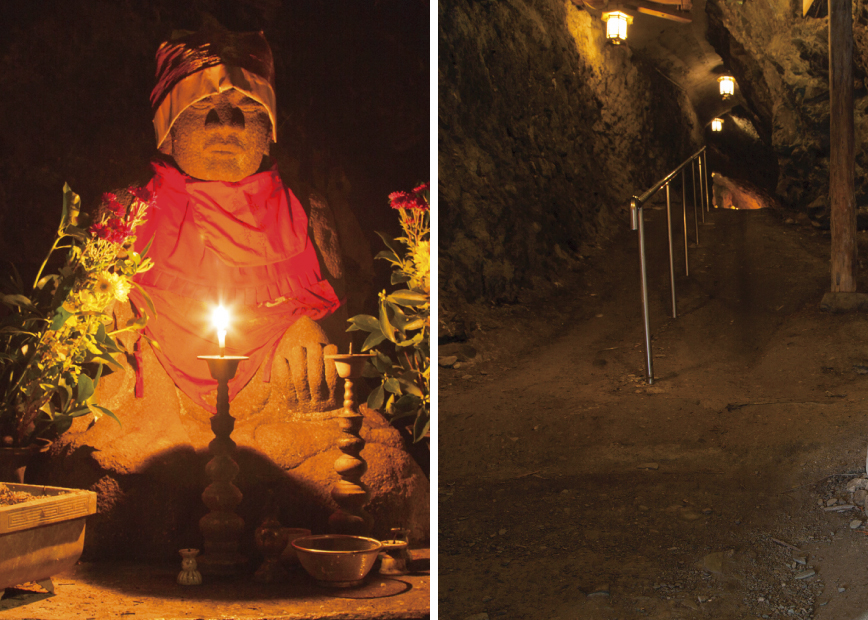 The cave beneath the Main Temple Hall is more than 10 meters deep and known to be an ancient spot for ascetic practices, where stone-carved statues of Jizoson (Khitigarbha), Fudo Myo-o, and Kobo Daishi are enshrined. Since the Jizoson statue is known for ancestral worship and the Fudo Myo-o statue is famous for answering one’s prayers, many pilgrims pay a visit to this cave. 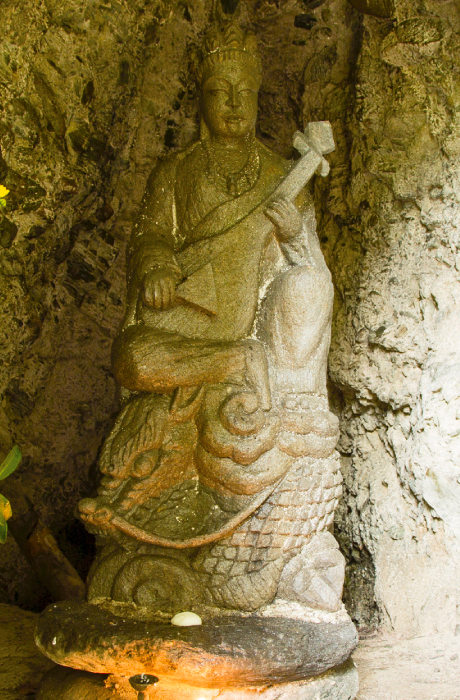 Benzaiten is enshrined in the cave behind the shrine for Kokuzo Bosatsu. As the name in Japanese (“plead for fortune”) suggests, Benzaiten is said to be beneficial to improvement of one’s economic fortune. Those in the field of entertainment tend to have faith in Benzaiten. 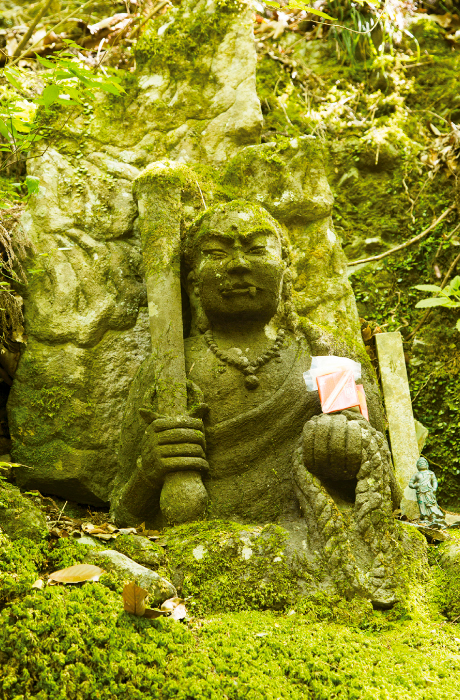 Halfway on the approach to the temple sits a stone statue of Fudo Myo-o behind the shrine for Kokuzo Bosatsu. The statue is said to be responsive to prayers by those who are about to start new things as well as those who have reached a dead end in a difficult situation. Many of the visitors to the temple stop by there. 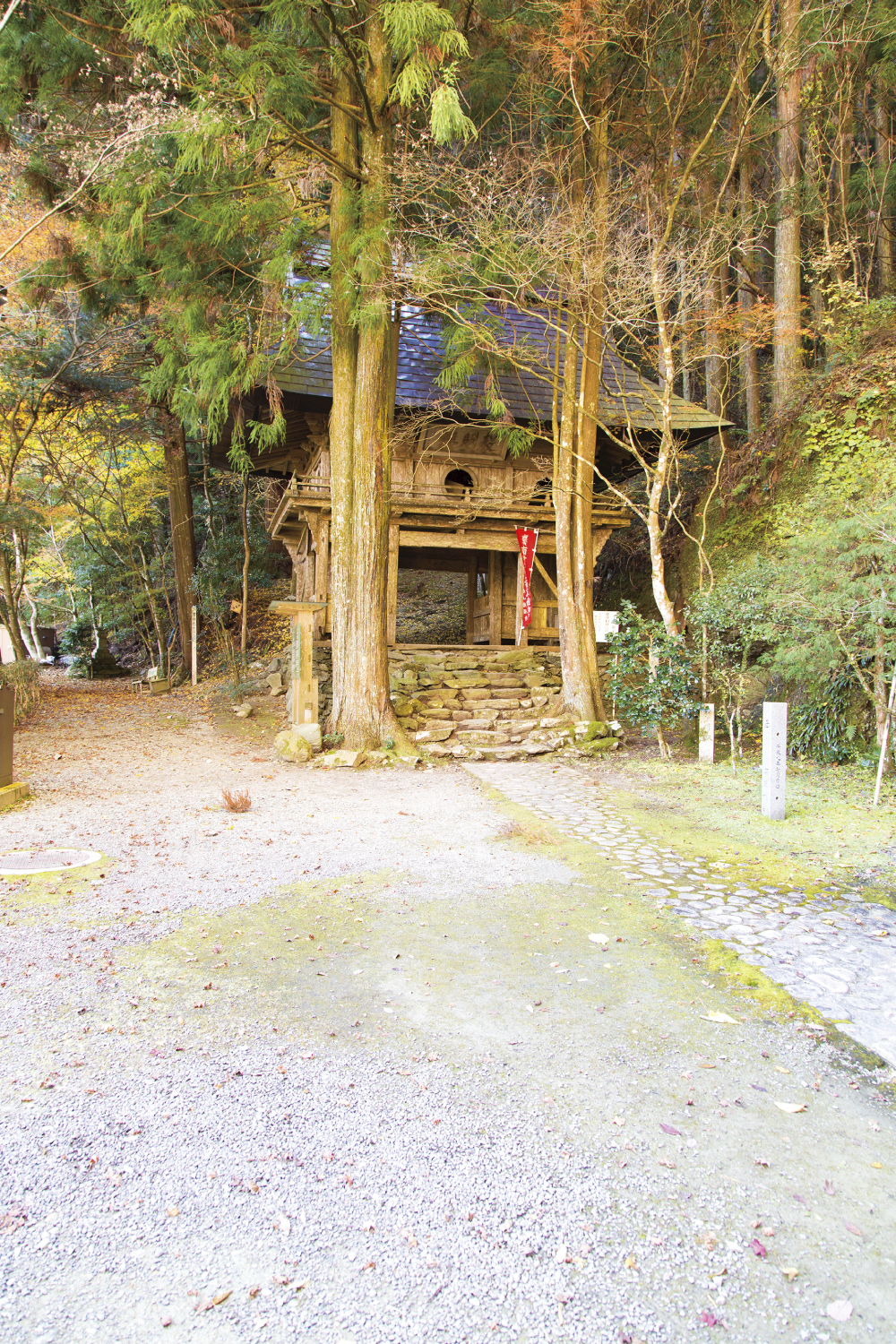 This is the entrance for those who have passed over the Hatcho-zaka hill to visit the temple. It was built in 1790 to serve as a belfry as well as a long-distance worshipping spot for the abovementioned “Cave Amida” and escaped the devastating fire in the Meiji period. Originally, the building had a thatched roof but now has a tin roof as a result of refurbishment in the mid-Showa period. Both the building itself and the two Deva Kings therein are now in a desperate state, urgently requiring considerable restoration work. A municipal designated cultural property. 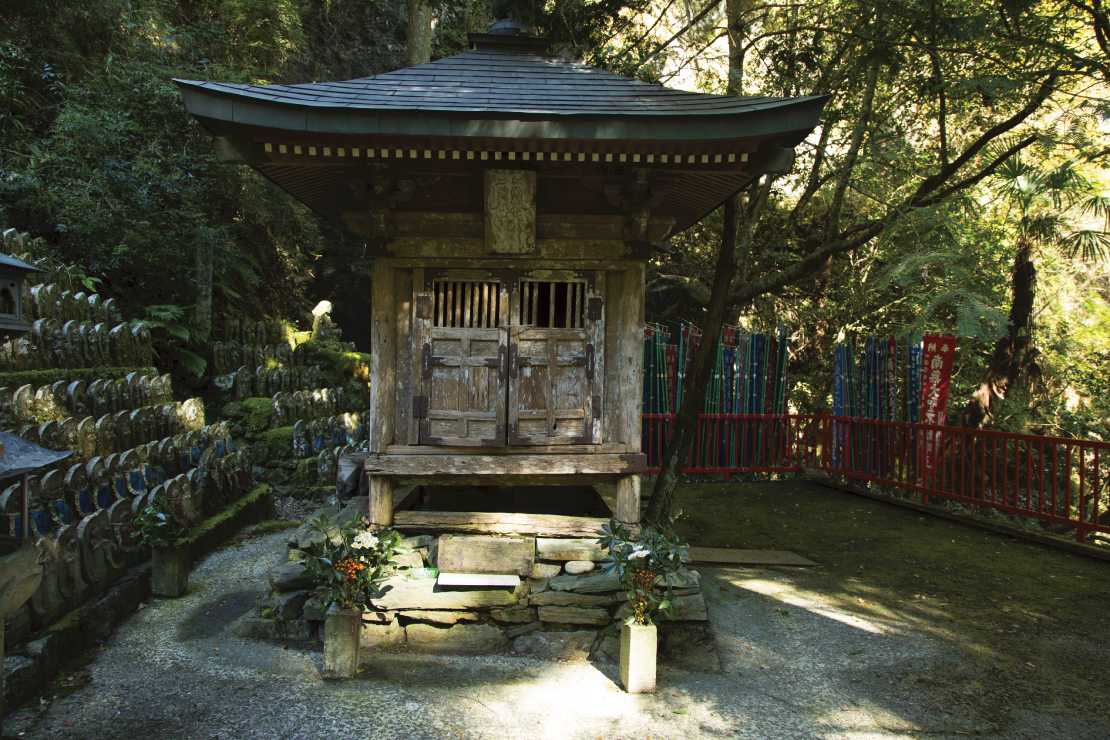 Erected in 1747. The phrase “showering heaps of treasures” carved on a wooden tablet under the eaves embodies benefits of worshipping Kokuzo Bosatsu that it brings about infinite wisdom and fortune. 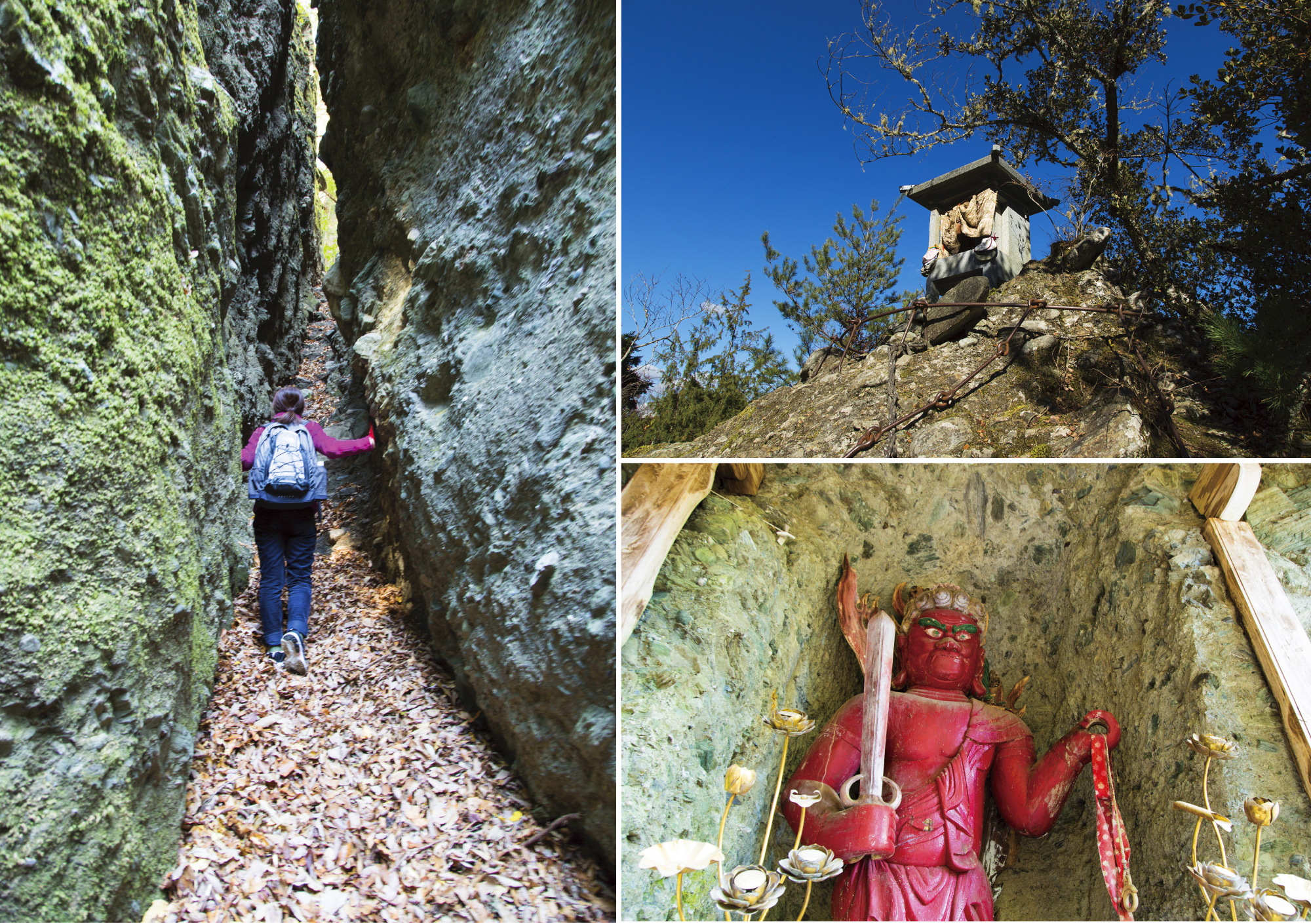 A place for ascetic practices depicted in “The Illustrated life story of the Venerable Ippen” (National Treasure, property of Shojokoji temple, Kanagawa Prefecture). Through the Deva Gate beyond the Temple Hall for Kobo Daishi awaits mountain paths leading to the Inner Shrine called Seriwari-zenjo (literally, a place for ascetic practices at a narrow crack between rocks).
Through a narrow path which looks as if it were made cutting a gigantic rock into two exact halves and climbing up a precipice with the help of chains and a ladder takes one to the Shrine for Hakusan Avatar. Standing on the summit commands a breath-taking extensive panorama of surrounding mountains including Mt. Ishizuchi. 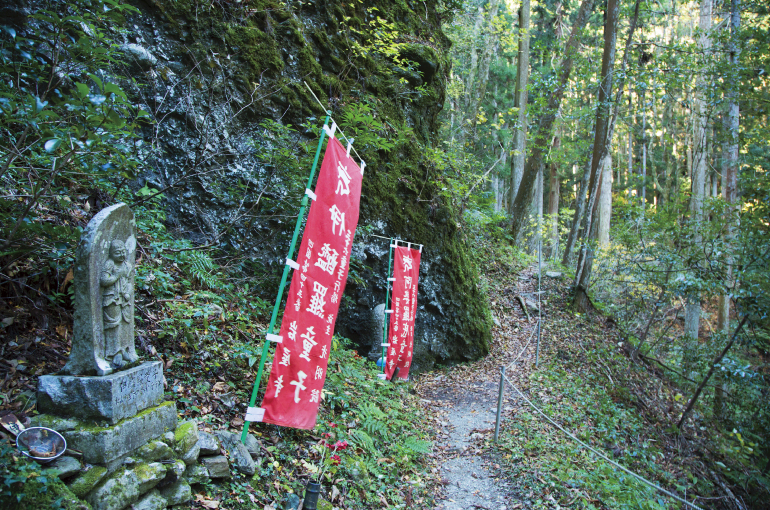 An ascetic route developed approximately 50 years ago. Thirty-six Juvenile Stone Buddhist Statues, which are said to play a variety of roles by the side of Fudo Myo-o, are enshrined scattered on a route around the mountain.
On May 5 every year, a festival praying for children’s healthy growth is held and many people tread this route.

*Votive cards for the Thirty- six Juvenile Stone Buddhist Statues on the ascetic route in the mountain: 300 yen
(Please call in at the temple office before making a trip around the route.) 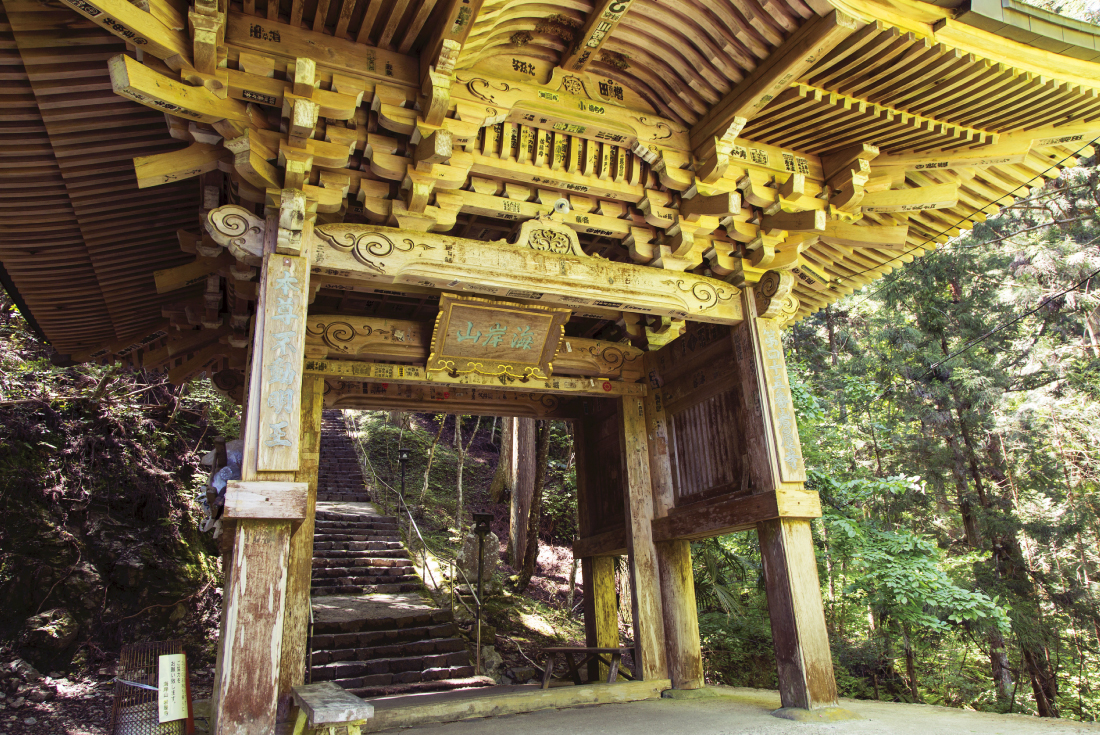 Erected in 1934 on the approach from the foot of the mountain.
The construction work was completed in just three months in time for the inauguration of chief priest at the time. 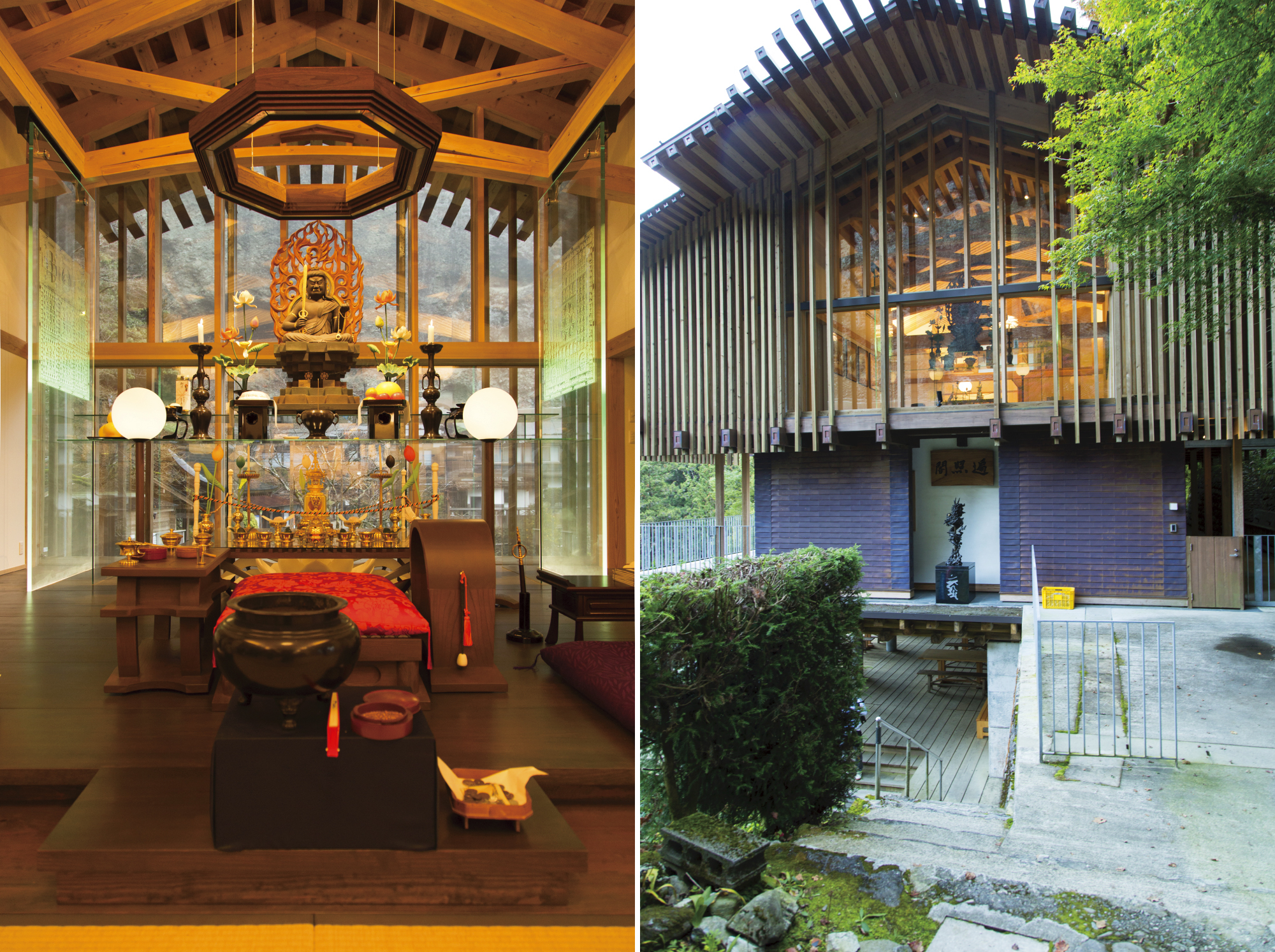 A building completed in 2014 equipped with facilities for memorial services and various events such as meditation lessons.
A terrace at the underground level is built using plenty of local timbers and serves as a resting place for visitors, offering a great view. It is also used as a reception area when seasonal hospitality events are held.